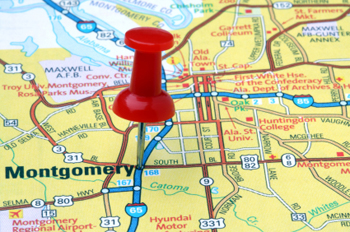 Montgomery County has a very colorful background. Settlers first began to populate the area in the early 1800s.

Montgomery County was carved out of Monroe County and originally embraced the majority of central Alabama, east of the ridge dividing the Tuscaloosa and Tombigbee Rivers from the Cahaba River, west of the Okfuskee and Coosa, and south of the mountains of Blount. However, it was soon subdivided and portions were set apart which made up Elmore, Bullock, and Crenshaw counties.

Montgomery County was named in memory of Major Lemuel P. Montgomery of Virginia, who fell at the Battle of Horseshoe Bend on March 27, 1814, becoming the first man to die in the battle. A statue in honor of Major Montgomery graces the entrance of the Montgomery County Courthouse, located at 251 S. Lawrence Street.

The lands of Montgomery County were put up for auction at the Federal Land Office in Milledgeville, Georgia in 1816. Larger parcels were sold to developers who subdivided the land into lots for urban commercial and residential use, predetermining a major city on the banks of the Alabama River at Montgomery.

When the Alabama Lands were offered for sale in 1817, two groups of speculators made their initial payments. One group, a company of Georgians led by General John Scott, bought the area along the river bluff and called it "Alabama Town." Later, a second group, led by Andrew Dexter, bought the area bounded by present day Court, Ripley, Scott, and Jefferson Streets and named it "New Philadelphia." The Georgians abandoned the Alabama Town and built the town of East Alabama, in competition.

A bitter rivalry between the two groups was finally terminated when the two towns were merged under the name Montgomery and incorporated December 3, 1819, eleven days before the State of Alabama was admitted into the Union.

The City of Montgomery, which became the county seat in 1822, was built on the side of the Indian town Ikanatchati (Econachatee), which means red ground, and Towasa on a high red bluff known to Alibamu Indians as Chunnaanaauga Chatty. Hernando DeSoto and his troops, who passed near Montgomery in the autumn of 1540, were the first Europeans to visit this region.

The City of Montgomery remained the sole municipality in the county until the Town of Pike Road was incorporated in 1997.

Today, Montgomery County has an estimated population of over 221,000, making it the fourth largest county in the State.

Even though Montgomery County and the City of Montgomery share the same name, it came from two separate namesakes.

Montgomery County was named after Major Lemuel P. Montgomery of Virginia, who fell at the Battle of Horseshoe Bend on March 27, 1814.

The City of Montgomery was named in honor of Major General Richard Montgomery of Revolutionary War fame, who lost his life in the Arnold expedition against Quebec.